Arriving to Villa Anica you can acquire something of the contemporary city break, but also of the appealing nostalgic past.

As it was the case with all villas above the former Maria Dorothea (wife of the then Hungarian viceroy) road, Villa Anica was built on the Polić family land as well. It is in this family that Janko Polić Kamov was born, writer of Isušena kaljuža (Dried Quagmire – 1909), a modernist novel that precedes the works of Franz Kafka and James Joyce.

That Rijeka is a city that offers a number of diverse stories can also be testified by the fact that the great German writer Ödön von Horvath (Stories from the Vienna’s Forest) was born in this quarter, i.e. only a few hundred meters farther, as well as the Italian writer of magical realism Enrico Morovich.

As different times keep interweaving in Pećine, we cannot be surprised to hear that the nearby Jadran Hotel was opened on 28th June 1914, on the day when following the assassination of the archduke Franz Ferdinand in Sarajevo the long-lasting 19th century ended and the World War II began, while life sped up so suddenly.

Sitting in the garden of Villa Anica you can look for fragments of the past that have been scattered in Rijeka so mysteriously, almost carelessly, but also look at the blue sea of the amazing Kvarner Bay, mentioned by Dante Alighieri in his Divine Comedy, the bay to which another famous Italian poet, Gabriele D’Annunzio, devoted the Kvarner poem. Not beauty alone, but also politics, a lot of passion… while the leaves rustle during the summer mistral. 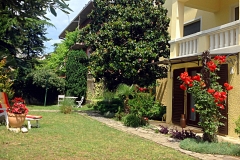 The sojourn tax is included in the price.